Pit bull ownership advocates like to say that pit bulls are just like any other dog.  The following extreme attacks in which a pit bull leaps from an upper story to launch an unprovoked attack with no warning shows that pit bulls are different and different in a deadly way.

2016  CO - The elderly woman received stitches to her hand and her little dog's shoulder was broken with several bite wounds. This seems to have happened in Aurora Co where there is a pit bull ban.

2016 SD - A pit bull leapt through a screen out of a second-story window for the sole purpose of attacking two women and their dogs walking on the street below.  One woman was bitten on the hand when she saved her dog from the pit bull.  The dog's leg was broken.  This is not normal pet dog behavior.  Animal control decided that the owner shouldn't be cited for failing to contain her pit bull because "it let itself out."

2014 CO - An illegal pit bull in Aurora lept from a second story balcony to attack and kill a shih tzu.  Witnesses heard the small dog screaming and saw the pit bull running around shaking it it, but they could not get it to release.  The owner came out and ran away with the pit bull, which he says is not his, and will not tell police where the pit bull is or who the owner is.
http://on.wtsp.com/1uhPdTQ
Archived by WebCite® at http://www.webcitation.org/6ZeKBOnpD

2013 MS - Pit bull leaps off second story balcony to attack its owner who was having a seizure
http://www.wlox.com/story/22915506/first-responders-find-pit-bull-attacking-owner-in-waveland 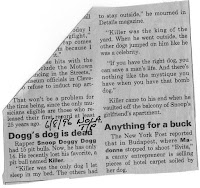 All Extreme Attacks Posts:
List of Pit Bulls that have Attacked Cars and other improbable objects