An Act to prevent Mischief from D O G S. 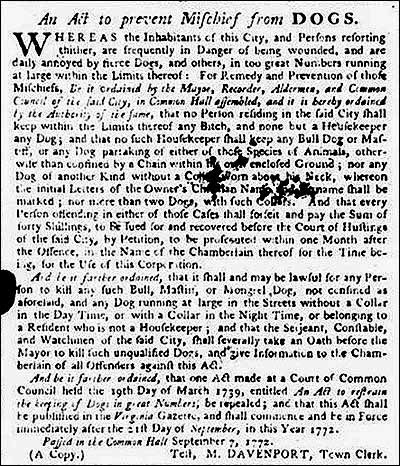 Whereas the Inhabitants of this City, and Persons resorting thither, are frequently in Danger of being wounded, and are daily annoyed by fierce Dogs, and others, in too great Numbers running at large within the Limits thereof: For Remedy and Prevention of those Mischiefs, Be it ordained by the Mayor, Recorder, Aldermen, and Common Council of the said City, in Common Hall assembled, and it is hereby ordained by the Authority of the same, that no Person residing in the said City shall keep within the Limits thereof any Bitch, and none but a Housekeeper any Dog; and that no such Housekeeper shall keep any Bull Dog or Mastiff, or any Dog partaking of either Species of Animals, otherwise than confined by a Chain within his own enclosed Ground; or any Dog of another kind without a Collar worn about his Neck, whereon the initial Letters of the Owner's Christian Names and [illegible] name shall be marked; nor more than tow Dogs, with such Collars.  And that every Person offending either of those Cases shall forfeit and pay the Sum of forty Shillings, to be used for and recovered before the Court of [Hustings ?] of the said City, by Petition, to be prosecuted within one Month after the Offence, in the Name of the Chamberlain thereof for the Time being, for the Use of this Corporation.

And be it further ordained, that it shall and may be lawful for any Person to kill any such Bull, Mastiff, or Mongrel Dog not confined as aforesaid, and any Dog running at large in the Streets without a Collar the Day Time, or with a Collar in the Night time, or belonging to a Resident who is not a Housekeeper; and that the Sergeant, Constable and Watchman of the said City, shall severally take an Oath before the Mayor to kill such unqualified Dogs, and give Information to the Chamberlain of all Offenders against this Act.

And be it further ordained, that one Act made at the Court of Common Council held the 19th Day of March 1739, entitled An Act to refrain the keeping of Dogs in great Numbers be repealed; and that this Act shall be published in the Virginia Gazett, and shall commence and be in Force immediately after the 21st Day of September, in this Year 1772.